Your ancestor was a civil servant ? Find out if he was receiving a retirement pension.
IMAGES

More than in any period before him, the nineteenth century is the one of the development of the state. And first human resource development, at a time when everything is still done by hand - or brain - of men.

The French state, whatever the regime, needs rural factors, brigadiers, office clerks for the central administrations as for the sub-prefectures, ushers or ecclesiastics - remunerated by the state until in 1905 - nurses or midwives, soon guardians, and always diverse and varied advisors..

For those who reach the age of retirement, and for their dependents, while there is still no universal pension system, the state grants pensions by decree. These decisions are public and published, between 1811 and 1918, in the "" Bulletin of the Laws "", official publication which crosses all the century and the regimes. 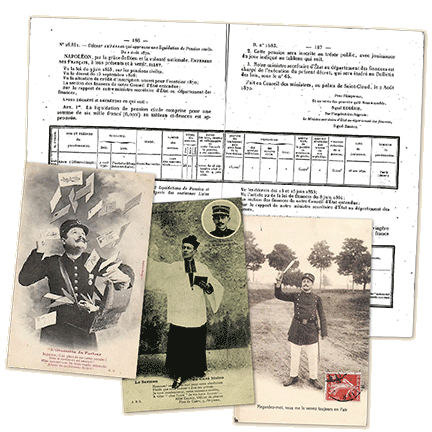