Your ancestor fought in the service of the papacy in the nineteenth century ? Discover his years of service.
PEOPLE

Created on January 1, 1861 on the model of the Zouave troops of the French army, whose exotic uniform is very popular in the nineteenth century, the battalion of Papal Zouaves, became a regiment on January 1, 1867, composed of volunteers, mostly French , Belgian and Dutch, but also Quebecer, Swiss or American, came to defend the pontifical state, whose existence is threatened by the achievement of Italian unity in favor of Piedmont. Its history is linked to the last decade of the State of the Holy See (1860-1870).

After having resisted against the Garibaldian troops, the regiment was dismissed on September 21, 1870 following the disappearance of the Papal States. After the fall of Rome, the Zouaves were repatriated to Toulon and their lieutenant colonel, Athanase de Charette, obtained from the Government of National Defense - which succeeded Napoleon III - to serve as a franc corps. The Zouaves then become the Legion of Volunteers of the West.

They will refuse to participate in the repression of the Commune of Paris to not have to shoot Frenchmen. These battalions will be dissolved on August 13, 1871. 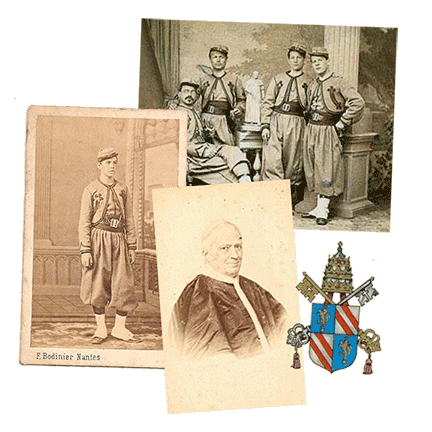