Your Poilu ancestor stand out in combat ? Discover his military exploits.
PEOPLE

The Great War developed among fighters - the majority conscripts and therefore non-military careers and from all sections of the French population - resources of courage and heroism unsuspected even of the latter. Faced with machine gun, alone or in a pack, many of our ancestors made exemplary feats of arms.

The French Army considered it worthy to honor and preserve not only the memory of these heroic deeds, but also the names of those who accomplished them. If the Legion of Honor is the Queen of Decorations, the Military Medal was awarded to more than one million four hundred thousand soldiers and sailors, officers or soldiers, mostly posthumously.

The Military Medal, also known as the "Brave Medal", honored exceptional military services : a quote to the order of the army, a war wound, an act of courage in battle worthy of reward or seniority after a certain number of years on duty. 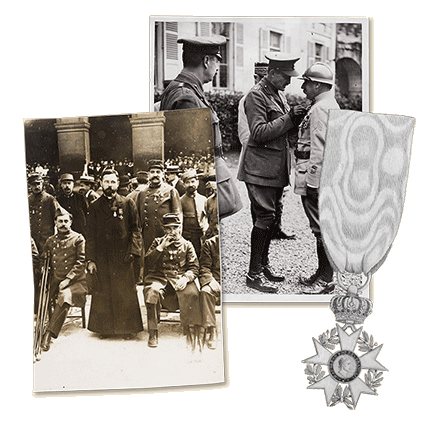