Directory of the French Army

Directory of the French Army

Nominative directory of the officers and non-commissioned officers of the French Army for the years 1824, 1873 and 1914

Nineteenth-century France is a warlike country. The First Empire carries war all over Europe almost without interruption. The Restoration helps all of its allies - as for example during the Spanish war - and begins the conquest of Algeria, which will spread over several decades. The campaigns of colonial conquest (in Algeria, Africa, Indochina ...) will be numerous.

The defense of French interests (in Spain, Syria, Lebanon, Crimea, Mexico ...) during the second half of the century will allow the French Army to distinguish itself. Not to mention the war of 1870-1871 which saw the fall of the Second Empire and the amputation of part of the national territory. Officers and non-commissioned officers, often on the front line, are at the heart of a vast organization that is also an administration in which one makes a career.

Indeed, since the French Revolution, any citizen, according to his merits, can become a non-commissioned officer or an officer, after an adequate training. A son of aristocrats or peasants can become graded and join the armed forces. 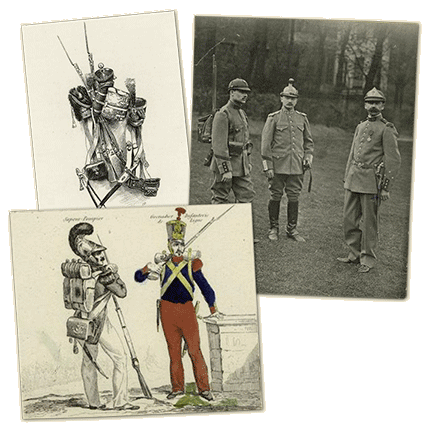