Your Poilu ancestor was in captivity ? Trace his course.
IMAGES

During the first world war, France lost more than a million and a half conscripts on the battlefield, but also saw hundreds of thousands of soldiers go into captivity.

The German army organizes prison camps within its borders, from Alsace-Lorraine to the west of present-day Poland. The German authorities decide to use the Gazette des Ardennes for propaganda purposes : it's a question of stunning French public opinion by the mass of captives, but also of giving oneself a respectable image by treating its prisoners well.

From the spring of 1915, the Gazette published the lists of French prisoners, the date of publication of which often differed by several months from the date of the beginning of captivity.

From 1916, these lists included prisoners from the Bulgarian and Austrian fronts, those from the Dardanelles battle, repatriations for health reasons, prisoner exchanges and transfers to Switzerland. 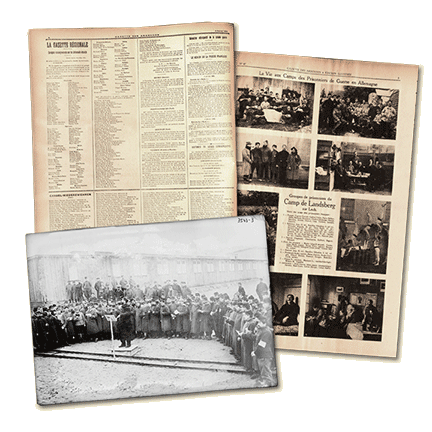