Your ancestor soldier survived the war ? Find out if he was receiving a retirement pension.
IMAGES

The nineteenth century is a warlike century. After the campaigns of the Revolution and the Empire, making a million deaths, it is necessary at the same time to maintain the widows and the rights-holders, as well as the old soldiers themselves.

The colonial campaigns - beginning with the conquest of Algeria, which extends from 1830 to 1848, then in black Africa, in Indochina, the war of 1870 ... - impose the maintenance of an active army. Demobilized, the different regimes will maintain the former soldiers, recognizing the state's continuity through different loyalties.

But in the nineteenth century there is still no universal pension system. For the hundreds of thousands of former soldiers and their dependents - over 700,000 pensions awarded! - the state allocates pensions by decree.

These decisions are public and published, between 1811 and 1918, in the "Bulletin of the Laws", official publication which crosses all the century and the regimes. 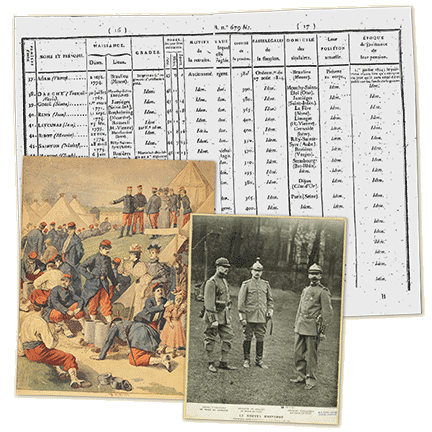