Your ancestor had the sea legs ? Find out if he belonged to the Royal Navy.
PEOPLE

Directory of more than 12 350 naval officers having served on the ships of the last kings of France, from Louis XIV to Louis XVI

In 1661, when the young king Louis XIV took over the destiny of his kingdom, Spain and England reign over the seas. Their colonial empires allow them to enrich themselves considerably and their navies are the policeman of the seas.

Colbert in turn builds a French navy worthy of France. It accompanies the economic, strategic and cultural development of France, in Europe and beyond the seas, allowing the foundation of the first French colonial empire, extending from New France to West Africa and up to 'to the Indian Ocean.

More than 12,000 officerswill sail the seas, counters of India to the West Indies so rich that they constitute the safe of the French monarchy, under Louis XIV, Louis XV and Louis XVI, both during the disastrous Seven Years' War (which sees the near disappearance of the Empire) as the glorious American War of Independence (which consecrated the supremacy of the French Navy in the 1780s). 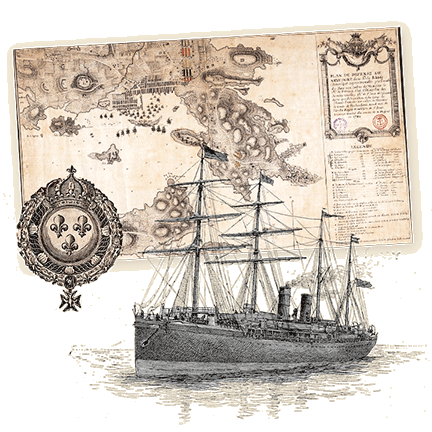