Find out if one of your ancestors was a recipient of the Legion of Honor.
IMAGES

Nominative directory of the 90,000 people promoted by decree in the Order of the Legion of Honor in the 19th century until 1918.

The promotion of Knight, Officer, Commander or even Grand'Croix of the Legion of Honor being a civil honor to which was attached an annual pension, the nomination benefited from a decree of the Head of State (King, Emperor or President) . These decrees of appointment, like all the official acts, were published in the Bulletin of the Laws and the Official Journal in the nineteenth century and into the 1920s

They include all the recipients, whether they were rewarded for bravery during the many wars of the nineteenth century, for outstanding service to power in place, whatever the regime, following a long career, for an invention. or a meritorious civil action.

Nominative directory of the 90,000 people promoted by decree in the Order of the Legion of Honor in the 19th century until 1918. 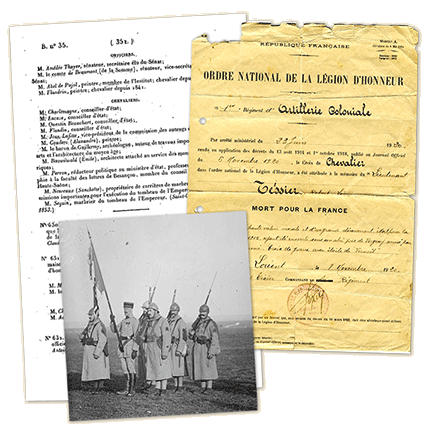