What is the history of your heritage ? Find out if one of your ancestors has done public charity work.
IMAGES

Numerical nominative compilation of more than 52,000 legacy authorizations and donations granted in the 19th century

Leave something to those who come after us is a constant concern of families, even more in the nineteenth century where social systems, pensions, unemployment benefits and various helps did not exist yet. It was therefore necessary to put everything in order before ones death. Especially since the state, regardless of the regime, was receiving its share of donations.

Alms, gifts, gifts of property or annuities, legacies and donations during the nineteenth century have experienced many forms. To transmit to his direct or indirect descendants, even to his friends, to agree to the duty of public charity, to help the development of a city or a corporation or even to mark the history of his time : the motivations are various. But all these gifts or legacies must be authorized by decree or ordinance. These authorizations were published in the Bulletin of Laws, the ancestor of our Official Journal.

These transfers of property in favor of an individual or an organization were the privileged witnesses of the evolution of mentalities of the time.

Numerical nominative compilation of more than 52,000 legacy authorizations and donations granted in the 19th century 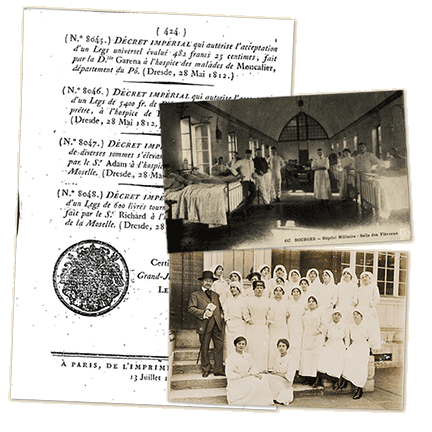