French and Francophones landed in Canada

French and Francophones landed in Canada

One-third of Canadians speak French. Discover this great-great-uncle who connects you to your Canadian cousins!
PEOPLE

France lost Canada by the Treaty of Paris of 1763, ending the disastrous Seven Years' War. French emigration ends abruptly. But she will resume timidly from the French Revolution. And if the United States remains the first destination for French-speaking migrants (French, Swiss, Belgians) in the nineteenth century, Canada, where French is spoken not only in the province of Quebec but also in many colonies of the center of the country, is not neglected.

Nearly 25,000 migrants - permanent or temporary, those involving travelers, traders, industrialists, priests or nuns ... - are discovered by random lists of passengers and disembarkation. In many cases, landing in a Canadian port (Montreal or Quebec City) is only one step to rail to the northeastern United States faster than via New York.

Thus, it is not in New York that we sometimes have to look for the landing of an "American" ancestor whose arrival in the United States can't be found but in a Canadian port. 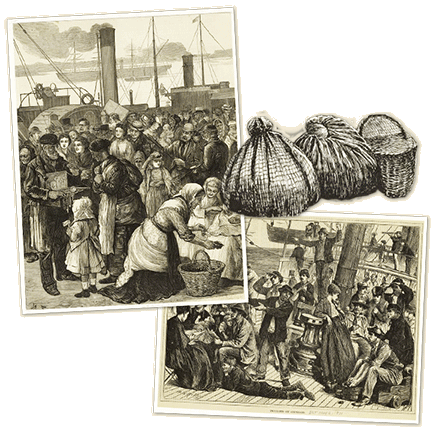