Your family emigrated to the United States ? Discover your "Uncle of America".
PEOPLE

ominative compilation of more than 76,000 naturalization documents of French and French speakers in the US since the nineteenth century

From the eighteenth century, North America attracts the French who think they find both an economic Eldorado and a land of freedom, especially religious. The Huguenots, whose worship is prohibited from 1685 within the borders of the kingdom, flee France by whole families, until the French Revolution. A part settles in the American British colonies that become USA. They are joined by emigrants fleeing the French Revolution.

In Louisiana, remained French despite the cession of the immense territory by Napoleon in 1804, French-speaking emigration, including French, Swiss, Belgians and Luxembourgers, is an important reality. Throughout the nineteenth century, the United States became the crucible of the Industrial Revolution. American companies need both low-cost labor and skilled workers and managers. France provides them with whole quotas.

At the end of the 19th century, it was the Alsatian optants or Magrebians from Algeria who crossed the Atlantic. The emigration of French and Francophones will be significant between 1870 and 1914.

ominative compilation of more than 76,000 naturalization documents of French and French speakers in the US since the nineteenth century 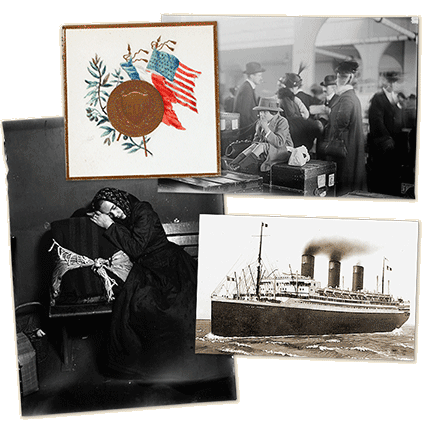