Digitized index of more than one million records of Parisian civil status and its suburbs for the nineteenth century.

The civil status of the city of Paris from 1793 consists of two original copies: the first is kept in the town hall, the second sent to the Registry of the Court House to guard against a possible disappearance. But that will not preserve the Parisian civil status.

In May 1871, during the Commune, fires ravage the City Hall and the Palace of Justice of Paris. All registers of civil status drawn up before 1859 in the twelve former departments of Paris then go up in smoke. These towns are: Auteuil, Passy, ​​Batignolles-Monceau, Montmartre, La Chapelle, La Villette, Belleville, Charonne, Bercy, Vaugirard and Grenelle. In the face of the disaster, a commission of reconstitution of the civil status is held between 1872 and 1897.

From 1924, the genealogist Maurice Coutot began a systematic survey of births, marriages and deaths kept in the parishes of the diocese of Paris and near suburbs, dating from the nineteenth century. In total, more than 1 million records are compiled. 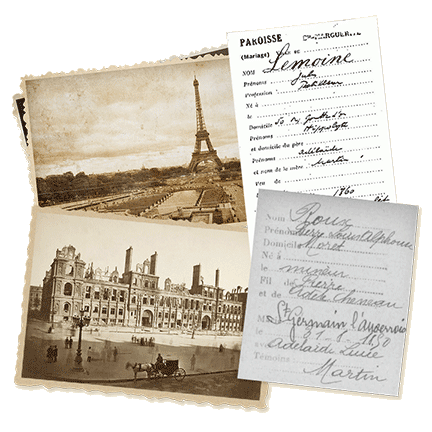