Your ancestor had a career in the army ? Find out if he was a recipient of the Military Medal.
IMAGES

Digitally named compilation of 25,000 nineteenth-century medal writers' decrees published in the Bulletin of the Laws

Wishing to attract the favor of the Army after his coup d'état of December 2, 1851, following the example of his uncle Napoleon 1st who had created the Order of the Legion of Honor, the future Emperor Louis Napoleon Bonaparte introduced many distinctions, including the famous Military Medal, compensating for the growing elitism of the Legion of Honor.

Promulgated by decree on January 22, 1852. it rewards the non-commissioned officers, soldiers and sailors having at least 8 years of campaign, for their bravery during the many campaigns of the Second Empire in China, Mexico or even in Italy. The French State grants them by decree the right to wear a badge testifying to their merit.

However, with the rights come the duties : it's also by decree that a medalist could be deprived of the privileges of the decorated, if he was found guilty of a behavior unworthy of the honor which was done to him. To this promotion was linked a life annuity of 100 gold francs, which assured to the recipient the bread and the tobacco for life.

Digitally named compilation of 25,000 nineteenth-century medal writers' decrees published in the Bulletin of the Laws 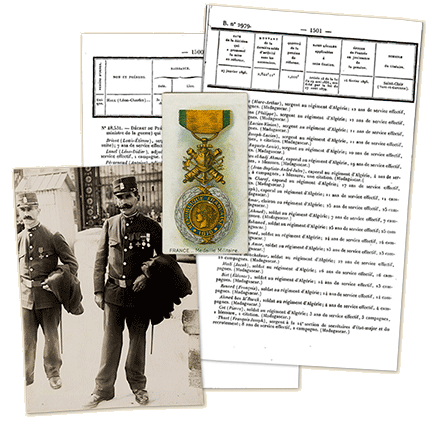