Your ancestors are from the North ? Find the archives of their military service.
IMAGES

Nominative directory of conscripts of the Department of the North

At the end of the 1st Empire, military service was abandoned. The law Gouvion-Saint-Cyr of 1818 institutes an army recruited by the commitment. The Cissey law of July 1872 restores compulsory military service by drawing lots, for a period of 5 years or, for the lucky ones, from 6 months to one year only.

In 1905, Berteaux law suppressed the draw, replacements and exemptions : now all men are called for two years, for a mandatory service.

In August 1913, the Barthou Record passed the service to 3 years, the census of conscripts being made at 19 years instead of 20, lowering the age of incorporation from 21 to 20 years.

After the First World War, in 1923, the service was fixed at 18 months, then to 1 year in 1928 and finaly to two years in 1935. To standardize this recruitment, are instituted in 1865 registers matricule. Also referred to as descriptive states and services, they identify young people to perform their military service and contain the conscript's marital status, physical description and service records since his census in his commune of residence.

For our ancestors, this military service is a rite of passage as much as a preparation for the defense of the fatherland. They "become men" during their road under the flags.

Nominative directory of conscripts of the Department of the North 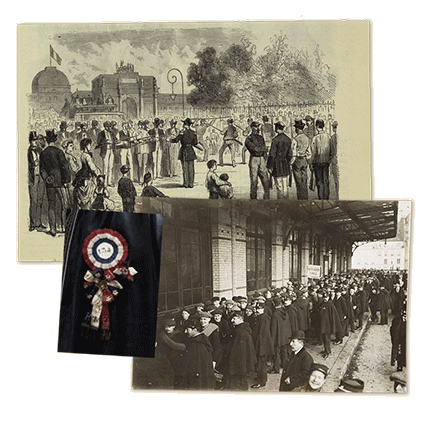