Did your ancestor invent slice bread ? Discover the creativity of your ancestry.
IMAGES

Numerical nominative compilation of more than 85,000 nominative decrees of attribution of invention during the nineteenth century.

At the time of the Industrial Revolution, our ancestors have never exercised their imagination so much to meet new challenges. Industrial property appears during the French Revolution. It is institutionalized by the law of January 7, 1791, providing for the creation of the office of patents, the name of the letters patent by which the king attributed the privileges to the old corporations..

The law of May 25 1791 complements the nascent legislation on "patents of invention", the term of which then appears. The patent administration is set up in less than two months, in the form of the Patent Directorate. It's with this Directorate, which will change its name in 1902, becoming the National Office of Industrial Property, that each inventor must apply for the filing of the patent. It mentions the detailed title of the invention, the identity of the inventor, the date of filing and the duration of the patent.

This collection includes patents from the 19th century. It mentions the identity of the depositary, the place of his residence, the name of his invention, the date of filing and the duration of the patent.

Numerical nominative compilation of more than 85,000 nominative decrees of attribution of invention during the nineteenth century. 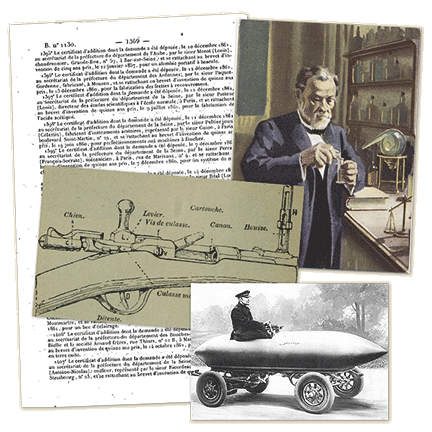