Belgian dead for the fatherland

Belgian dead for the fatherland

Your ancestor gave his life for Belgium during the first world war ? Discover the circumstances of his disappearance.
IMAGES

While public opinion thought that the conflict would last only six months, the First World War dragged on and became extremely deadly.

Invaded and occupied from the first months, Belgium won't be completely liberated until the very last hours of the conflict. During their occupation, the Germans committed numerous abuses. After the military losses of the first days, many civilians perished or were deported

This collection of archives dedicated to the Belgians who died on the field of honor brings together all the infantrymen, artillerymen, horsemen, aviators, engineer troops and special corps ; From the simple soldier to the superior officer,1,700 officers and 35,000 soldiersfell on the field of honor for the defense and liberation of their homeland.

We must also mention the civilian heroes (nearly 8000) convicted of "crime of patriotism" by the Germans, deported dead in captivity or civilians, innocent victims who were shot or massacred without mercy in the first days of the invasion. 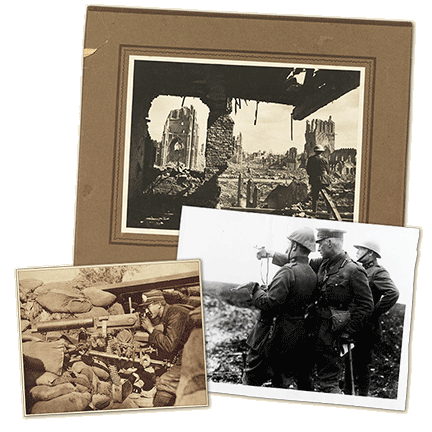